This creature seems to resemble a very large thri-kreen, except for a number of small but striking details: Its exoskeleton is covered in unusual spikes, knobs and other protrusions, and its claws are larger and more wicked than those of a normal kreen. 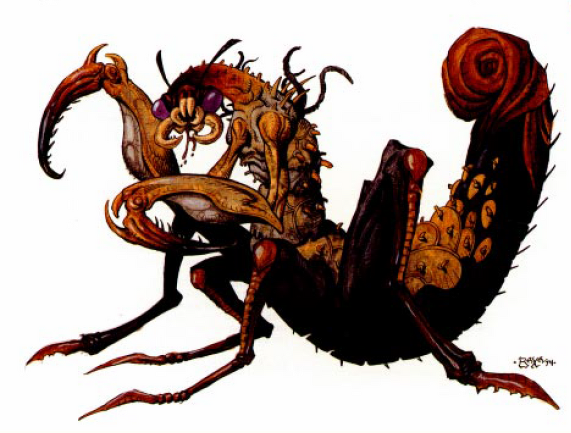 Zik-tin‘ak are merciless and fearless in combat. They follow the orders of their masters and will never retreat unless ordered to. Generally, they prefer to ambush opponents, attacking them from afar before closing into melee.

Zik-trin‘ak are the elite guards, scouts, and soldiers of the Tohr-Kreen Empire.

Zik-trin are a race bred by the zik-chil for loyalty and combat prowess. They are not a natural species, but rather are created from tohr-kreen or thri-kreen by the zik-chil in a deeply secretive and complicated ritual. Once the process is complete, the kreen is permanently changed into a zik-trin, and all memories of its former life are gone forever. Zik-trin faithfully serve the Priests of Change, the zik-chil, and obey only their orders. They are not automatons and are capable of thought and even speech (though they rarely choose to speak). It is simply that they are wholly loyal to their creators and live solely to serve them.

Zik-trin speak Thri-kreen, on the rare occasions they choose to do so.

Zik-trin’ak have no society of their own and live on the edges of tohr-kreen society They can be found wherever they are sent by the zik-chil; they respond to the orders of zik-chil (whom they identitfy) by pheromones) and no one else. They enforce the will of the zik-chil and the policies of the the tohr-kreen empire. They do not refer to themselves as zik-trin, but call themselves tohr-kreen.

As implied by its name (which translates as “near-person, altered for combat”), the zik-trin’ak has lost its identity. These creatures are devastating combatants, but at the cost of their personality and beliefs, almost like zombies in many ways. Much like in in their ferocity, zik-trin’ak are also cold, controlled, and cunning. They cannot breed.

Zik-trin’ak are dangerous hunters. Zik-trin were ordinary kreen before their conversion; the process is believed irreversible.

Community content is available under CC-BY-SA unless otherwise noted.
Advertisement