House Shom's largest fortress east of Nibenay is Fort Inix. It is, however, one of the oldest active merchant effort. According to the stories, the fortress was also used as a the northern part of the Ivory Triangle region. Fort Inix can be found at an oasis 30 miles east of from Nibenay to thriving settlements east of the Ivory Triagle. Caravans from across the Tyr region would pass through a transition zone where the salt flats of the Great Ivory Plain Fort Inix, collecting mounts and trade goods for the long caravan route. The fort itself sits upon a man-made hill. The Fort Inix oasis is most fertile in the season of sun ascending and early high sun. At this time, the immediate region is filled with flowers, small brush, and other light vegetation. By the end of the high sun season, however, the land has all but dried completely, with only a few deep wells producing water. 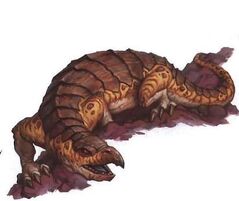 As is typical of House Shom, the complement of the as not diminished with the declining activity. Extensive resources are committed to maintain a huge staff to manage the nonexistent inix herds and caravan trade. Because of its history, Fort Inix is a prestigious post for an up-and-coming agent of the house despite its uselessness, and many vie for the honor of becoming Fort Inix's new master trader. The post of master trader is at best temporary, as any assigned to this post are quickly transferred either to higher posts, or if they are not politically adept-to even less prestigious backwaters. Few traders come to Fort Inix, primarily because prices here are so high. There is a sizable black market selling goods in the bazaar at lower prices, and many believe that this black market consists entirely of goods stolen from the warehouse in the fort. Prices in the black market are less than those charged at the fort itself, but they are often not competitive with the less heavily burdened fortresses of the other houses in the region. Because the master trader is constantly changing, traders have become used to dealing with the more permanent minor functionaries. Simply surviving at Fort Inix is becoming more and more difficult.

Community content is available under CC-BY-SA unless otherwise noted.
Advertisement