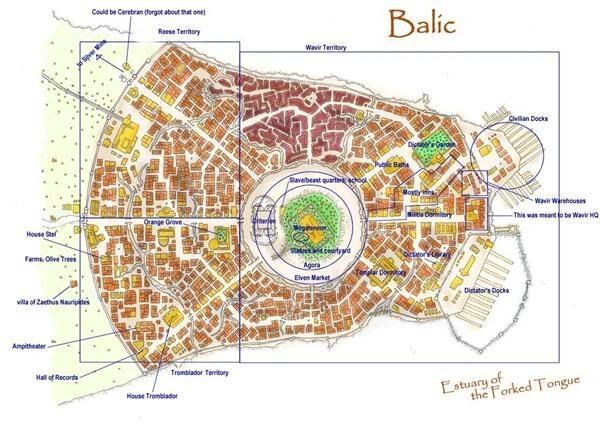 Balic is ruled by the Dictator Andropinis, a powerful

seven-hundred years ago. Though the term dictator

originally referred to the power of dictating (as

in stating) a city policy sanctioned by a democratic

the title and off ice into one of total authority.

Anyone who speaks against him is executed by dictatorial

On the rare occasions that someone is brave

enough to voice a complaint about the harshness of

reminding all within earshot that their ancestors

elected him to his post for life. Unfortunately for the

citizens of Balic, nobody realized just how long Andropinis

Andropinis lives in a majestic palace of white

marble, rectangular in shape and adorned on all

sides by magnificent columns. This palace is located

atop a stony, fortified bluff in the center of the city.

made from the sharpened thigh bones of erdlus.

Balic's templars are unique in that the free citizens

of the city elect them to their posts for ten-year

though he sometimes lets the citizens know

which candidates he would like to have elected. I

have heard that if the wrong candidate wins the election,

Andropinis has him executed and calls another

most other nobles, they hold their lands from generation

to generation. Most of them make their living

from the olive orchards and grain farms surrounding

the city, but a few own large parcels of the scrub

plains, upon which they carefully graze kanks and

other creatures, twenty miles west of the city.

the base of Andropinis. rocky fortress, in an area

called the agora. The merchants do a bustling business

in olive oil, kank nectar, and the decorated pottery

produced by the city.s famous potters. The

Elven Market rings the agora on all sides, so that it

is impossible to do any legitimate bartering without

first being assaulted with dubious offers.

Balic.s secluded location is quite defensible as far

as the armies of other city-states are concerned, for

it is impossible to approach the city from any direction

except the west. Unfortunately, its close proximity

to the Forked Tongue Estuary causes the city

more than enough trouble from giants who wade

ashore to raid. Every citizen in the city, male or female,

slave or freeman, is a member of the militia.

On a rotating basis, they spend every tenth month

helping the normal army patrol the fields and scrublands

in an effort to reduce the amount of crops and

Located in the middle of the Estuary of the Forked Tongue in the Tablelands.